This year 912 universities from 83 countries took part in the GreenMetric ranking. Russia was represented by 52 universities. Udmurt State University became the first and so far the only university of the Udmurt Republic to take part in the ranking.

The ranking allowed our university to conduct a self-assessment of its campus sustainability, to strengthen internationalization and earn more recognition due to the fact that UdSU took its place "on the global map", competing with universities around the world. All UI GreenMetric members are by default the members of UIGWURN (UI GreenMetric World Ranking Network). Through this network, members can share their best practices in sustainable development programs, interact with other members around the world by participating in the annual UI GreenMetric International Workshop and regional / national workshops organized by approved host universities.

The university plans to continue participating in the UI GreenMetric ranking. In the future, this will help UdSU to create an academic discourse on sustainability in education and campus development, to involve the regional government and local environmental institutions in this discourse, and will contribute to university-related social changes, taking into account the goals of sustainable development. 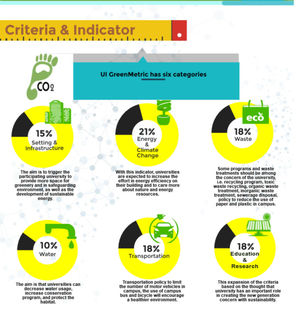