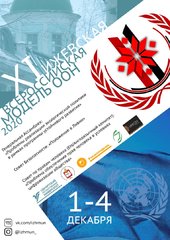 December 1st to 4th Izhevsk and our university will be hosting the All-Russian UN Model (IzhMUN) for the 11th time. This is a joint project of 3 UdSU divisions: the Institute of History and Sociology, the Department for Youth and Social Affairs, and the UdSU Academic Library.

The UN Model is a combination of conference and roleplay which simulates the work of UN bodies where they discuss burning international issues strictly following the rules of diplomatic and business etiquette. Thus, this year the Model will be representing the UN Security Council, the UN General Assembly, and the UN Human Rights Council.

The event aims at strengthening the inter-faith and inter-ethnic relations among young people, developing the participants’ professional and personal skillsets through scientific dialogue, study and analysis of international conflicts, ways of their resolution in the form of purposeful roleplay activity. The UN Model welcomes up to 80 university and high school students, both domestic and international, for participation. The IzMUN working languages are traditionally Russian and English.

Throughout the 4 days of the Model work the participants impersonate the diplomats of the countries which gathered in the UN to address some of the global issues. They express their respective country’s viewpoint rather than their personal. This requires a UN delegate a thorough knowledge of history and foreign policy of the country they represent, as well as excellent analytical and public speech skills.

The UN Model results in adopting a resolution by each of the bodies on their relative issues which is a compromise between the standpoints of participating countries. Afterwards this document is sent to the UN Association of Russia in Moscow, and later – to the UN Secretariat in New York.

The detailed information about registration for the XI IzhMUN event can be found here.